As I gear up for my Sunday evening routine of prepping for the week ahead, catching up with my inbox, and making sure all my projects at work are on track, I realized that it’s been a while since I updated my blog. In fact, it’s been a while since I paused to reflect on some of the things that have happened. The weeks, it feels like, have progressed at an unceasing, unrelenting pace. This is my time out and a chance to make note of certain things both in the spirit of celebration and as a reminder that I can always be better.

In February, I went through with LASIK surgery. It was uncomfortable and painful for a few days, but the results have been amazing. No more glasses or contact lenses. I wear sunglasses when it’s bright out, something I never used to do. I look different in pictures. I wake up each morning and I see 20/20.

Of course, I got used to it really quickly. I had told myself before the surgery that not having to put on contact lenses would make it so much easier for me to wake up and work out each morning. That was wishful thinking. It’s still a battle, and I find myself battling my own excuses that it’s too cold out or that I should be careful not to push myself too hard and get sick.

I’ve been good about sticking with my plant-based diet. It’s pretty automatic for me now. On long trips or special occasions, I’ll allow myself some dairy, meat, and fish. It’s no big deal. But when I’m at home or at work, I’m pretty steadfast in my diet of fruits, veggies, legumes, nuts, and grains. My favorite go-to foods: dates and avocados. I still need to work more greens into the diet.

I’ve cut down alcohol consumption pretty heavily. Some weeks, I’ll only drink once. And when I do, I try to keep it light. This has led to some additional weight loss. I don’t think I’ve been as light as I am since middle school.

I started using Headspace, a meditation app, back in January and I’ve stuck with it. I use it five times a week on weekday mornings. I wake up, push my pillow against the bed headboard, sit up, and go through the 10-minute session. I’ve finished the Foundation sessions, completed the pack on Focus, and now almost done with the Anxiety pack. I can honestly say that meditating has really made a big difference in how I go about my day-to-day. I’ve found myself processing day-to-day situations differently with greater awareness. It’s as if I’ve been able to develop a more detached view of the inner workings of my mind and, when lucky, been able to call bullshit on myself. There’s so much more to learn and practice–I’m looking forward to continuing and hope these packs never run out.

I’ve been fortunate to do some traveling in the past few months. I’ve also been training to run my first half marathon, which is coming up in a few weeks. On my trips, I’ve made it a point to bring my running gear and sneakers so I can keep up with my training. These were some memorable runs in memorable places:

I especially love the feeling of going for a run in the morning, letting my body feel and wake up to the the outdoors, and then making my way back knowing that I’ll reward myself with a hearty breakfast and a cup of coffee. I think it’s one of the best ways to start the day.

I’ve been less diligent about reading these past few months, but I did finish a few books that have left quite an impression on me. They are:

Team of Rivals: The Political Genius of Abraham Lincoln by Doris Kearns Goodwin
After reading this, I have even more respect for Abraham Lincoln and the kind of leader and human being he was. His capacity for compassion, kindness, and generosity (expressed often in the book as his “magnanimity”) was almost superhuman, especially as he readily forgave and embraced those who undermined and betrayed him. His shrewdness for strategy, politics, and playing the long game was also admirable. He saw the bigger picture and was patient with his moves while his opponents and detractors could only see what was in front of them. When I finally got to the part of the book when Lincoln is assassinated, I couldn’t help but feel an incredible sadness. I wondered what would have been had he not died. What did America lose with his death?

Replay by Ken Grimwood
In this science fiction novel, the protagonist Jeff Winston dies suddenly at the age of 43 only to wake up as his 18-year-old self back in time. Without giving much more away, I’ll say that Jeff has multiple opportunities to “replay” his life but always ends up “dying” at age 43. I couldn’t put this book down, and found myself taking long walks replaying my own life for the past fifteen or so years. In reminiscing my blunders, successes, and luck, it became clear to me that the book’s lesson wasn’t about looking backward with regret and nostalgia. It was about taking control and savoring what lies ahead.

Traction: Get a Grip on Your Business by Gino Wickman
This business book, which introduces the Traction Entrepreneurial Operating System (EOS), has been a helpful guide for our management team at Barrel. The biggest benefit has been the framework for setting goals and keeping us accountable on a weekly basis. I hope to share more about this and its impact on the company in a separate post in the future. While we’re just scratching the surface of truly instituting the EOS company-wide, I like the progress I’m seeing so far.

The ten-year anniversary of Barrel is coming up in a few weeks. I’ve been thinking about the milestone, where we are right now, and where we want to go. It’s been a mixed bag of emotions. I’m grateful for so many things and there are plenty of fond and pleasing moments directly associated with the company and the people who’ve been a part of it. I’m also regretful and disappointed in what could have been had I been more focused and mature over the years, but I also tell myself that I’ll have plenty of opportunities to contribute, lead, and raise the bar of my performance. Overall, my mind’s been trending in an optimistic direction, and I’m excited about what lies ahead for Barrel.

A few other random things from the past few months:

Melanie and I took selfies in front of a couple different triumphal arches in the past few weeks: 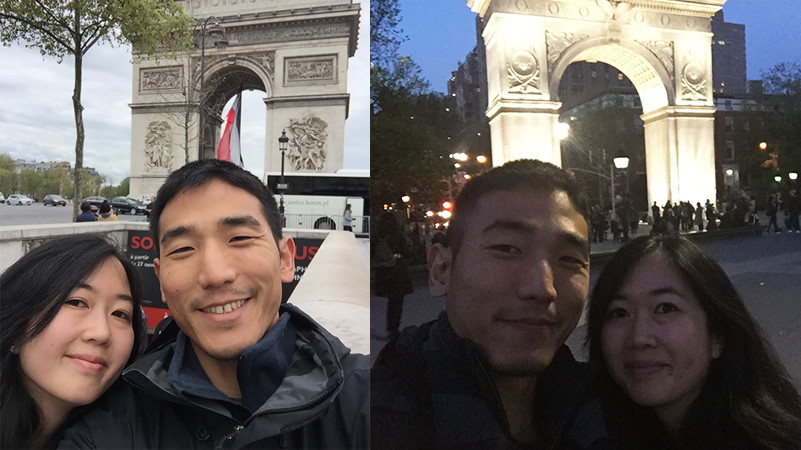 Selfies in front of Arc de Triomphe in Paris and the Washington Square Arch in New York.