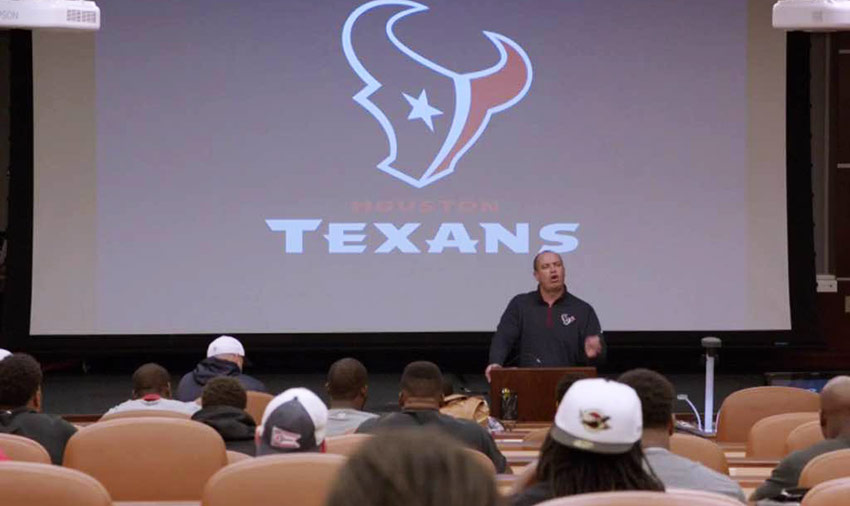 I really enjoyed this season’s Hard Knocks on HBO, a 5-episode series that takes viewers behind-the-scenes of a different NFL team’s training camp each season. This season, Hard Knocks focused on the Houston Texans. Bill O’Brien, in his second season as Texans head coach after his stint at Penn State, made the show very compelling for me, and I thought there were some good takeaways in his leadership style. One thing stuck with me is how O’Brien stays consistent with his message to the team and the various ways he reinforces this throughout training camp.

After a good practice, O’Brien tell his team: “We gotta do it all the time, we gotta keep building, we can’t go backwards. Let’s keep bringing energy to this practice field.” This is a message that he repeats in practices, before and after games, and during team meetings throughout the five episodes.

Rallying his team before a grueling session of practice, he tells them: “The one thing that we have to hold on to is our competitive edge. We can never lose our competitiveness. Ever. We have to come out here every day with the mindset that we’re gonna win every drill. That’s the mindset we gotta have. That is our edge. the way that we practice is our edge.”

And when it comes to evaluation, especially with roster spots on the line, he makes it clear: “What we care about as a staff is performance, is how you guys are performing day in and day out.”

And when he doesn’t like what he sees, he lets the team know: “We can’t have a shitty fucking day.”

The message he sends to his players is clear: you have to earn your spot on the team and show that you deserve it, every single day.

Throughout training camp, O’Brien not only broadcasts his message to the entire team, he reiterates it in his one-on-one conversations with players, especially those who are on the cusp of making the team. “Keep coming this week,” he tells Charles James, a cornerback who plays with heart but must overcome his small stature.

Even after naming Brian Hoyer as the starting quarterback, O’Brien tells him: “You’ve got to earn it every day. When it comes to leadership, it’s important for a quarterback to be a leader, no doubt about that, but you’ve got to earn it on the field. You’ve gotta win games with the Houston Texans before you become the leader of the team.” While O’Brien tells Hoyer that he’s “not on a short leash,” he tells the other quarterback Ryan Mallet that he should be ready to play if Hoyer doesn’t get the job done. We know now that Hoyer was in fact on a pretty short leash—after underperforming in the first three and a half quarters of the season opener, Hoyer was benched and replaced by Mallet.

There are a couple scenes in the show where the players mock O’Brien by imitating him. In both situations, they make fun of the way he presents himself (e.g. towel draped around his neck, his tendency to drop f-bombs, the repetitiveness of his message), but you also get the sense that the players respect and buy in to the content of his message.

The Hard Knocks series ends with a speech that O’Brien makes to his team after final cuts are made. The team, which started out with 90 players at the start of training camp, must slim down its roster to 53 players heading into the regular season. After a series of difficult conversations where he gives direct and honest feedback to the players who don’t make the team, O’Brien stands in front of the ones who’ve made it and reiterates his message one last time:

I’ve been thinking about the message I want to convey to my team at Barrel day in and day out. The challenge is to hone in and carefully craft a message that is simple and easy for everyone to absorb. I’ve noticed that during the course of a week, I have a dozen priorities and values that I’m trying to communicate. While different circumstances require the appropriate message, I know that I need to think deeper and connect our priorities and values into a cohesive, easy-to-remember message. If O’Brien’s ultimate goal is to win as a football team, then the message he uses as the platform for the team’s values and priorities is to show up and put in the work every single day. I’ve been experimenting with some messages at work and seeing how our team members respond to them. I know that in order for anything to stick, it’ll have to a) sound and feel authentic, b) be dead simple, and c) resonate in a way that connects the individual to the goals and mission of the company.

So much of what leadership entails is communication. Over the years, I’ve mistakenly believed that I had communicated enough or that I didn’t need to repeat myself. I’ve learned the hard way that what may seem overstated or obvious to me personally may be unclear or under-addressed to others. Watching O’Brien on Hard Knocks, I found the consistency and repetitive nature of his message to be an effective leadership tactic that can play an important part in strengthening and contributing to team culture.

Note: This isn’t the first time I tried to write about leadership and football. I previously wrote about how running a business is much like building a college football program.